After four days, 200 miles and 20,000 feet of climbing, Eric and I finished up our bike tour through the mountains of Western NC. It was one of the best trips I’ve taken anywhere - I had never been on a bicycle tour before and absolutely loved it. (See the photos from our trip here.) It’s such a great way of seeing a place; there is so much to take in at every moment, completely immersed in one’s surroundings and the elements. 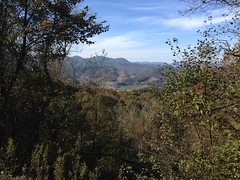 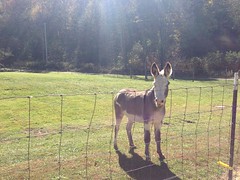 The Parkway, Asheville to Sylva

Our first day had us riding up from Asheville to Sylva, NC via the Blue Ridge Parkway. For those who haven’t ridden the parkway, I’m not sure I can recommend it to everyone, but for you climbing types, it’s amazing. The views are just incredible, it’s quiet, the roads are in good shape, and the traffic is minimal. (For all the Parkway’s history with the Works Progress Administration and the New Deal, it was somewhat astonishing to see that the majority of cars passing us had Tea Party type bumper stickers.)

Our hosts in Bryson City had recommended we start at dawn to get to Sylva in time, but we had a late night out visiting with friends and didn’t get on the road until 9 AM. Our friends live right near the Parkway, so basically you take a right turn, then start climbing. And climbing. And climbing some more. We started taking breaks every two or three miles, I think we were averaging 4-5 mph. The climbing was unlike anything either of us had experienced before. The difficulty of the climb was more than compensated for by the spectacular views of the mountains. 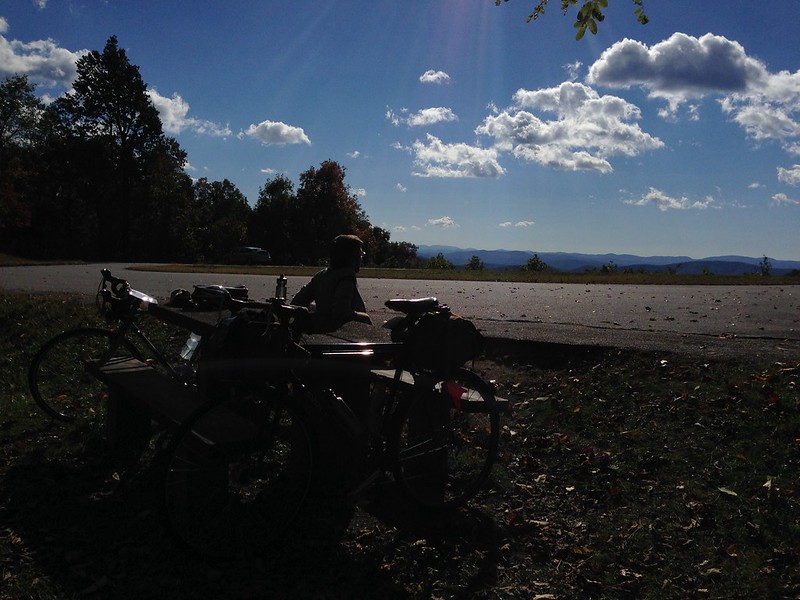 After a few hours though, the cold set in, and we realized that we were racing against the weather and the time to get to Sylva before it became dark or we froze (both seemed likely scenarios). We decided that reaching Balsam Gap would be an accomplishment. When we got there, we called our host from Warm Showers, Ron, ready to give up on making it to Sylva. With his encouragement and directions, we carried on another 50 minutes - on a beautiful country road running alongside a river and train tracks - and made it into town at dusk. Ron and his family were wonderful hosts, showing us around town and Ron even rode with us for a bit as we made our way out of town the next day. 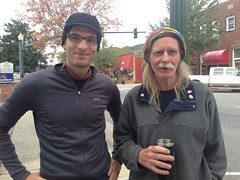 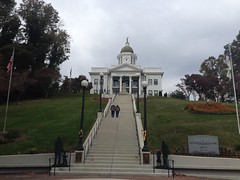 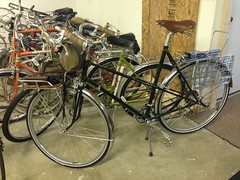 The next day, the ride from Sylva to Bryson City was a breeze, about 25 miles on quiet country roads, no big climbs, and a nice ride through Dillsboro NC. Everything was great except for the segment from Dillsboro to Bryson City. It turns out the only way you can get there is via NC Bike Route 2. Oh, a state bike route, sounds great right? Except NC Bike Route 2 is also known as the Great Smoky Mountains Expressway, also known as a four lane highway where people are flying past you at 70 mph on a winding road. The shoulder is miniscule: on the left you have the rumble strips, and on the right you are trying to dodge debris and roadkill. Many of the exits require left hand turns crossing over all four lanes, an impossible task on a bicycle with cars traveling so fast. How on earth can the NC DOT mark this as a cycling route? Next time, I would just as soon take the tourist train from Dillsboro to Bryson City and skip the highway.

In Bryson City, we were met by our lovely hosts Raquel and Jack Moore. Avid bike tourers (see the blog Velo Hobo), they seem to host quite a few folks when they are not on the road. Jack made a delicious stew for us, and we have a nice evening chatting and resting our legs.

There was a hard freeze the night we arrived in Bryson City, so we waited for the temps to rise above freezing before getting started on our way to Waynesville. Due to the cold we decided to skip the parkway and take US-19 through Cherokee, then up through Soco Gap. (Tip: when planning a bike route in the mountains, look at a 3D map with elevation profiles of the mountains, valleys and gaps you’ll be traveling through!) The ride on US-19 from Bryson to Cherokee was one of the nicest segments; you travel alongside small towns on a windy road that runs along a river and train tracks.

Then you get to Cherokee which was quite depressing. There must be more interesting parts but the highly touristic, casino-oriented center was sad.

Leaving Cherokee and up to Soco Gap was one of the toughest climbs. The last few miles took about 2-3 hours of climbing, and by the time we got to the water falls, it was absolutely frigid! The descent from Soco Gap down to Waynesville was memorable both for the blinding cold and the 9% grade on the first three miles down the mountain. We arrived tired but happy in Waynesville.

Leaving Waynesville on Saturday morning, we took a route along an old state highway that took us through Canton. The ride to Canton and out of Canton was amazing; we took Newfound Road north of Canton and up through Hooker’s Gap road, beautiful quiet roads with few cars and lots of idyllic scences. Canton itself was pretty difficult to bike in and out of, the smell from the paper mill was overpowering. The last stretch into Asheville was not great either due to traffic, but we made it through.

This being my first tour, I wasn’t quite sure what to expect. I know now that cycling in the mountains is incredibly taxing; you have to experience it to really know what you are in for - and in retrospect we should have planned for 30 miles on the first day not 70. And we probably should have looked into the route more closely; it was mainly luck that kept us off “State Bike Route 2” most of the time (our original plan had us on that most of the time!). Some useful lessons learned, and a wonderful time had by both Eric and I who are already plotting the next bike tour. If you have any questions about our route or suggestions for cycling in the area, get in touch.